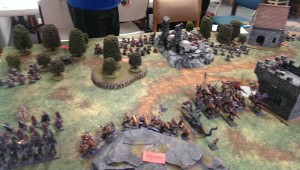 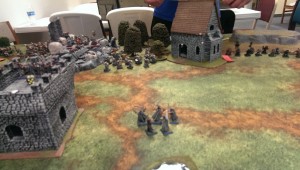 Couple of things I found particularly surprising in the game:

Overall though, I thought the game was fun. In the game I played against Kenny who was playing dwarfs using one of the formations at the end of the Dwarf PDF. The big deal here was that it let him re-roll ones to hit, which, turns out is really huge. Meanwhile, I got out my Dark Elves. I had intended to shoot this as a video to feature on the YouTube channel, but due to some technical difficulties that went out the window.

Like I noted, shooting was particularly brutal and not having anything with a better than 4+ armor save meant that you are taking wounds a lot on things and needing to test battle shock. Shooting ranges are thankfully rather short, so you usually are in for just a round of shooting or two from the opponent and then you are stuck in. This means you need to be either particularly fast if you have to or you have to be able to absorb those wounds and ignore those battle shock tests.

With the elves, I felt like I really missed my Always Strike First re-rolls. Oh, did I mention, yeah that is gone too. This meant that every time you have a sub par roll you really feel it. Couple this with Kenny’s Formation being able to re-roll 1’s and terrain generally giving him the ability to re-roll wounds and when I got stuck in it felt exceptionally brutal.

I did win the roll to decide how the table sides would be set up, but didn’t realize the advantage the terrain would give. Next time I play, this won’t be overlooked. Another big thing we overlooked in the game and this is something that I think a lot of us will have to break the habit of is getting out of the you go, I go mentality. At the start of each turn you have to roll to see who goes first. It isn’t set. We played it like normal Warhammer, but this could have been especially devistating if Kenny would have been able to go first on turn 2 after going second on turn 1. Back to back gunning me down in the open would have been just horrible and probably would have nearly wrapped the game up before we had even seen one combat.

I am looking forward to the next time I can play, if for nothing else to help just reinforce the rules and get a little more practice. If you are in the Madison area on the 18th of June, swing by Pegasus Games for our Age of Sigmar release event! Try the game, enjoy the paint and take, and play in some open gaming with your existing models and at least one person that should have a couple of games at the least under their belt.