At WiscoDice, we try to cover all of the tournaments we attend whether we win or lose.

Opening of the Heavens 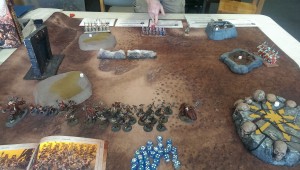 Across the realms the sudden rolling thunder and scintillating flashes heralded no mere storm, but the start of a new era. Much rode on the sudden shock attacks of the Stormcast Eternals, for Sigmar knew he had only one shot at taking his almighty foes unaware. A single failure could spell disaster….

WiscoDice will be putting on a Warhammer: Age of Sigmar tournment at Pegasus Games on August 22, 2015 starting at 10 am. This is intended to be a narrative event, fun for everyone and everyone will walk away with something from this event!

There will be a $10 entrance fee that will contribute 100% to prize support for this event. If there are enough people out, we will have door prizes on top of the top awards in the rules pack. Event will be at Pegasus Games Madison on August 22nd. Schedule included in the rules pack.

Hey all, it’s that time of year for Blood in the Sun 5, or often referred to as BITS. Can’t believe I have been coming to this tournament now for 5 years. That’s 5 great years of Warhammer, fun and friends and this year was like others. All ready I have met a bunch of first time tournament goers, hooked up with old friends, watched some cool games and seen some really cool models.

Enjoy the pictures of this year’s event, either now or in the future. These are hosted through Google Photos so the link will redirect you away from the site. If you are watching these as I take them, I will be adding and syncing pictures I take with this folder.