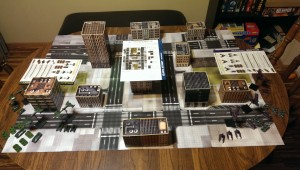 What I realize, as I do with a lot of games, was that the best chance I was going to have to get other people to play is if I have enough stuff to run some intro games. Looking at the deals out there, it seemed best to pick up the 2 player starter set so I would also have a copy of the rules. As pictured above, this is the full contents of the 2-player starter, which is a lot of stuff including the terrain.

The game uses 10mm scale models, so things like the tanks and a single infantry model are incredibly small. If you can’t really fathom 10mm, think N Gauge model railroading and that’s about the right scale. When you think that small of a scale, you tend to think there isn’t going to be much detail to the models. When it comes to vehicles, this is simply not true. The detail is amazing. When I was working with the plastic infantry though, these were a little sad as they don’t hold up as well. Now, I have seen pictures of some metal infantry and resin infantry models that look much better, but I don’t have them to compare currently.

Everything in this game seems a bit expensive when speaking of money. Now, that isn’t speaking Games-Workshop price tags, but you can rack up some money in a hurry picking up models. It also appears that some of the key models you want, at least here in the United States, are out of stock at most retailers and distributors. This makes want to add that command vehicle or light dropship to your army a bit spendy if you have to track it down on E-bay. The average “tournament” game is supposed to be 1500 points. The starter sets come in at around 700 points, give or take and depending on the faction, the starter may or may not be stuff you really want to use.

I won’t get into the details of how the rules work. There are some great videos out there and Hawk Wargames has some great how-to content out there as well to get you started with a feel for the game. However, I will say the game rules aren’t too bad and with the 2-player starter, the initial scenario that comes with it in addition to the models will run you several great early games that will continue to be fun as you learn the rules and start making small additions to your collection like a commander and a couple of light dropships. Honestly, considering that this game was really designed by one guy, including model design, rules, photography, painting, etc over a few years of work and playtesting, the rules flow well, are pretty easy to pick up, and are good. The one thing that I have found myself tripping over is the number of abbreviations for the various different statistics on vehicles/infantry/aircraft. Once you have those down, and a general basic feel for the game this game grows on you.

Obviously, it’s 10mm so a lot of your Warhammer terrain-like buildings just don’t work. The 2-player starter is a really good pick up for some basic play mats for your first few games and enough buildings that as you get into bigger games and bigger tables you can fill in some of the rest of the terrain from stuff you may have with your Warhammer stuff. Hawk Wargames also has a number of options for terrain that you can print off and either fold out the paper buildings, or glue to the thick card or foamboard to make additional buildings. There are also a number of vendors out there making MDF, resin, and other levels of quality terrain at this scale that themes well with the futuristic game. Your going to want big buildings on your tables, as well as a good amount of what really amounts to larger terrain so this gives you some great options.

I won’t give away everything here, but the game has a rich background that allows you to have some great campaign play and themed games if you want. The game sets out with humans really on the back foot, having lost Earth and many beautiful core worlds that they controlled. The core game, which you get in the 2-player starter, starts with the UCM starting their invasion. Later expansion books, of which there is one currently, are continuing the story giving not only new units, and potentially new factions, but also enriching the background and advancing the story arc as the invasion continues. Overall, I think it’s a really cool way to take a look at more and more of the setting as we are shown new options to bring into our games.

I think the game is pretty good. It has an amazing depth and scratches that itch for something different. It’s not a high fantasy, swords and magic game, like Warhammer, which makes it a lot different than just picking up say 40k which I like. It lets me play with cool vehicles and does a great balance between combined arms — aircraft, ground units, anti-air, and infantry. I can play a game on my kitchen table, or I can play a really big game on a more traditional 4×6 which is also nice. The models are small, so I don’t need a lot of storage which is also great IMHO. I would recommend picking up the 2 player starter and giving this game a try if you get a chance.