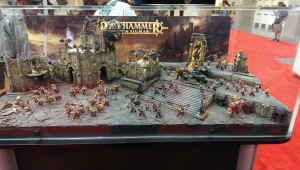 So, a lot of questions have been going around about Games-Workshop, Warhammer:Age of Sigmar, and Gen Con. We all know that GW camped out a guy at Forgeworld open day and that they answered a lot of questions about the game. As I understand, they had some issues getting the guys they wanted over to the US for this year’s Gen Con, but they still have a both at the event and staff there. I had the opportunity Thursday afternoon near the closing of the hall to engage and talk to them about Warhammer: Age of Sigmar and the future of the game.

Their booth has no product to sell, all of that is staged at the Forgeworld booth which is separate and on other side of hall. My impression was that the addition of the separate Games-Workshop booth was more of a last minute decision, and when you couple it with some grumblings from some vendors that thought they should have had boot space in the exibition hall you understand why. However, and not to really be to much on a side tangent, people come to this convention to see the big companies like Games-Workshop. It sucks, but that is the deal. They come and people buy tickets.

So, I spoke with one of the nameless booth guys for about 30 minutes or so regarding Warhammer: Age Of Sigmar. One big thing he pointed out to try if you don’t want to stack models on bases, use weapon range plus 3 inches. All models in that bubble can attack. I still don’t see how that’s a perfect answer, but it’s generic enough that I wouldn’t mind trying that.

Regarding the whole No Points thing, well I pushed back pretty hard on that one. The answer just seemed to be about this whole, you deploy a unit, then I do, and that a horde of zombies can actually do damage to a few characters. No word on competitive rules pack or game balance rules. I explained the problems we are having locally in Madison with it and what we need from GW. I didn’t take this news lightly though and pushed back and explained the issue we are seeing in Madison. He pointed out in previous editions how there wasn’t true balance between armies. I agreed on the point, but also added that at least it gave us some starting point to work from. The current model just doesn’t work. Of course, he wanted to calculate total number of units or limit the number of wounds. I expressed my concerns in this regards, but we never did come to a solution that seemed to benefit either approach.

I approached my conversation today more from a, I don’t hate Age of Sigmar. It has possible merits and getting new players talking and trying the game seems to be working. I expressed my concerns over long term, 3-6 months player base numbers without a mechanism to tell people what to play. I referenced how Fellowship of the Ring flopped when it was launched, partially because of that. I did point out as well that

We, as fans of the Warhammer setting and games, let Games-Workshop know that we love this thing with attending conventions. It’s awesome, but we want more and we want to know what’s going through their thoughts.

If you have more questions, please let me know. I have a captive audience for a weekend so I can go back with a list!

I did tell him that we need unit cards. Sell us decks of them for our old armies. We will buy them. His answer, it’s being discussed….﻿