Alien Frontiers is a board game of with a theme of colonization of a planet. You are in a race with your other players in the game to complete your colonization of the planet before they do. Overall, the game is a solid game and seemed best with 4-5 players in our experience. 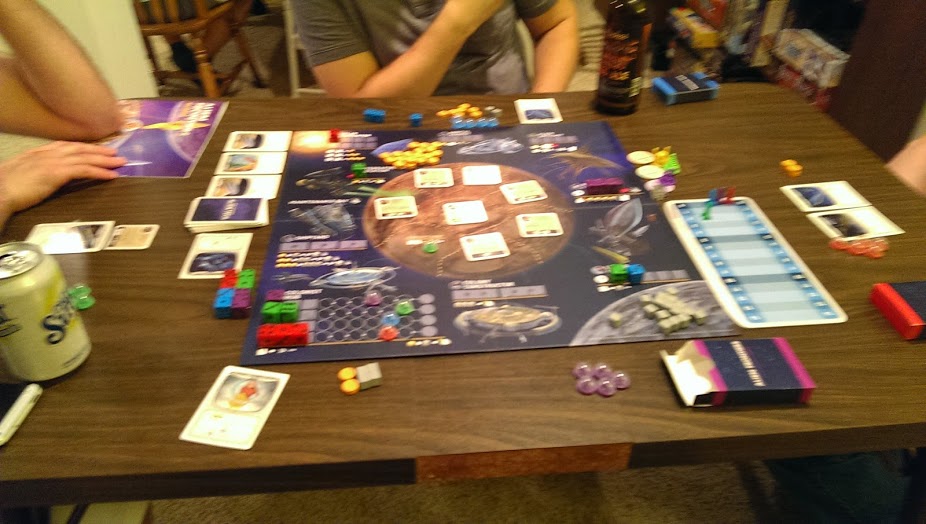 So, overall, I found this game a lot of fun. On the plus side, you get to roll dice that become “ships” that you can use to put to work at various orbital stations. There is something always great and fun about being able to roll dice. Being a game where you are trying to colonize, you have a limited supply of colony ships that it is your goal to add them to the board. This not only is the primary way to score points, but also a great way to control the end game.

Early placements of your colonies should be to pick up as many of the bonus tiles you can for having the most in a zone. While some of these may play better into your strategy, all of them are useful. Another key to success is getting as many of your dice out as you can. More dice, more actions. Near the end game, you really want to be in the position to be the player to place their last colony. This is the end of the game. Players do not get one last go or reaction so if you can end it and win the game then it is pretty much the best place to be.

Now for the bad stuff. It seems that there is a bit of downtime in 4 and 5 player games and while you may have an idea what you want to do, so much is dependent on what you roll on the dice as to whether you can do what you want or not. At 5 players, it is also very dependent on what is left on the board as options for you. While I think that is much more key to game play and being able to “block” opponents from being able to do things.

Overall, I really enjoyed this game. I would give it something like 3 out of 5 stars. A good game that’s fun. A good kind of game to have a single copy of in your game group, but not so great that I would run out and buy a copy just to have it. Still, I am glad we have a couple of copies in our game group and with a couple of games of it now under my belt, I am really looking forward to playing this game once again.