How I Paint My Ghouls

FINALLY…I posted my ghouls to the blog! 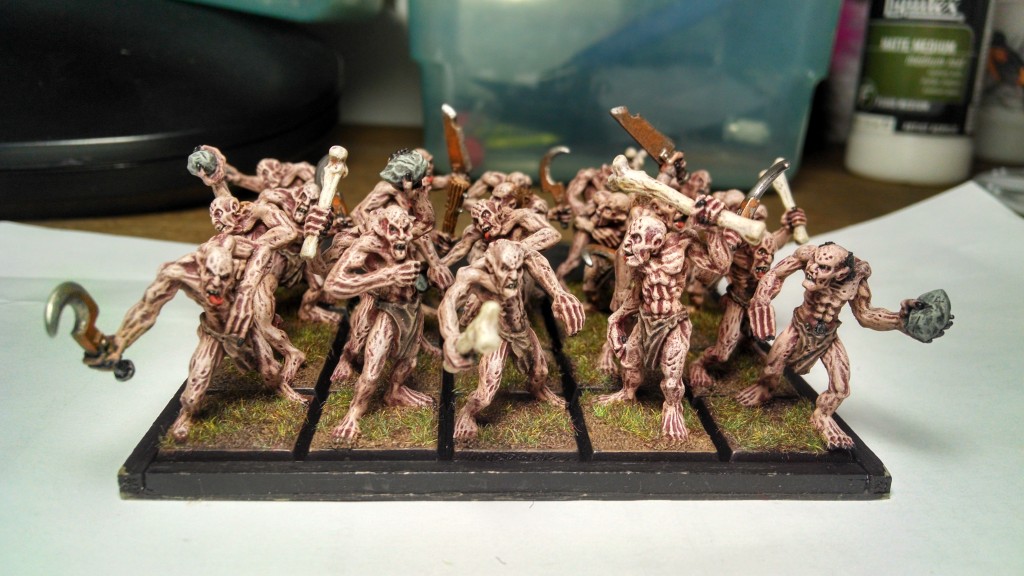 In case you missed hearing it mentioned one of the numerous times on the show over the past year or so this is Brian following up with the painting guide for my ghouls.  This is the second unit I have ever worked on after getting my hands on the How to Paint Citadel Models book so long ago.  The step-by-step pictures in that book really worked to get me started painting. The technique is a really simple process of base coat, wash, layer, and highlighting easy for any beginner to pick up.  While the models don’t end up anything golden daemon worthy, the technique results in a very good tabletop quality or I’ve been told even slightly above that.  Most importantly I am happy with how they look and am proud when I put them on the tabletop.  While this won’t be interesting or impressive to the seasoned painter I hope any beginners or people skeptical of their skill find this inspiring to get paint on their models.

Anyway on to what I did!

I’m using almost all gw paints and named them but they are a mix of the older and newer ones.

I started off with a black undercoat for these guys.  I am told that is usually the easiest as the final model is less likely to show any missed areas in the recesses.  That’s a very good thing for new painters but a white undercoat is said to make the end colors more bright if that’s what you’re going for.  That fact doesn’t bother me as I want my vampire counts army to be fairly dark. 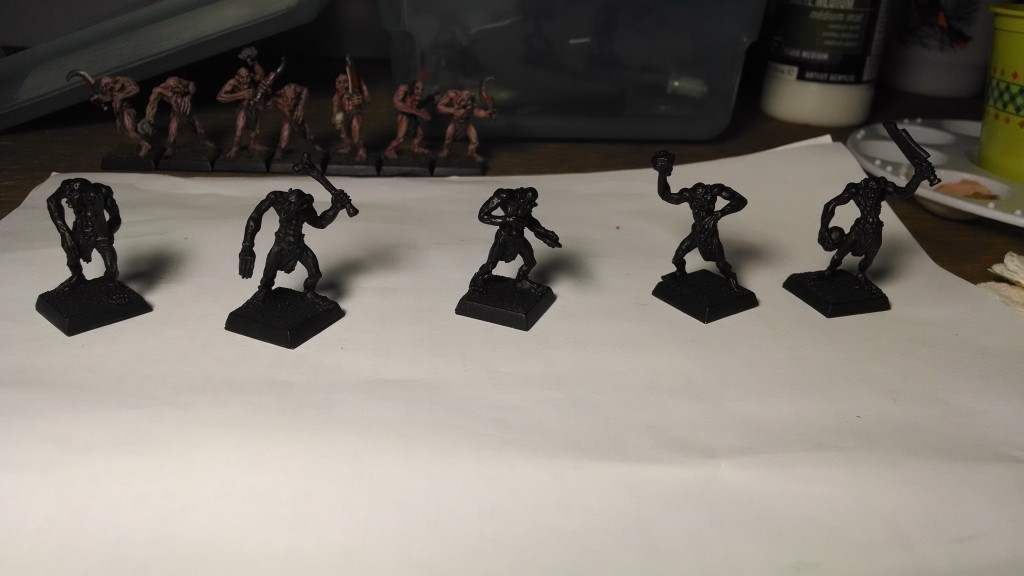 First is the main base coat for the skin, screamer pink, which is the majority of the model.  I chose these colors by varying the process from in the book for the Liche priest’s skin to end up with the look I wanted.  As you probably noticed these are the older metal models and I wanted them to have a slight pink to them similar to how the gw ones were usually pictured.  So for now the book’s process matched what I wanted with the pink base coat.

Next is the wash for the skin and I used Reikland Fleshshade.  This is where I diverted from the book that used a purple wash first because that was too dark and also blocked out the pink color I wanted.  The flesh wash still left a pink hue to the model but also brought it closer to the flesh tones that are going to finish off the skin.  Sorry but the pictures are just from my phone with my hobby lamp so they don’t show the washes or highlights very well, this one is even a little dark.  I’m always slightly amazed just like the first time I washed a model of how it shaded and shows the model’s detail so easily.  Washes are definitely one of the best things a new painter can do to get their models looking nice. 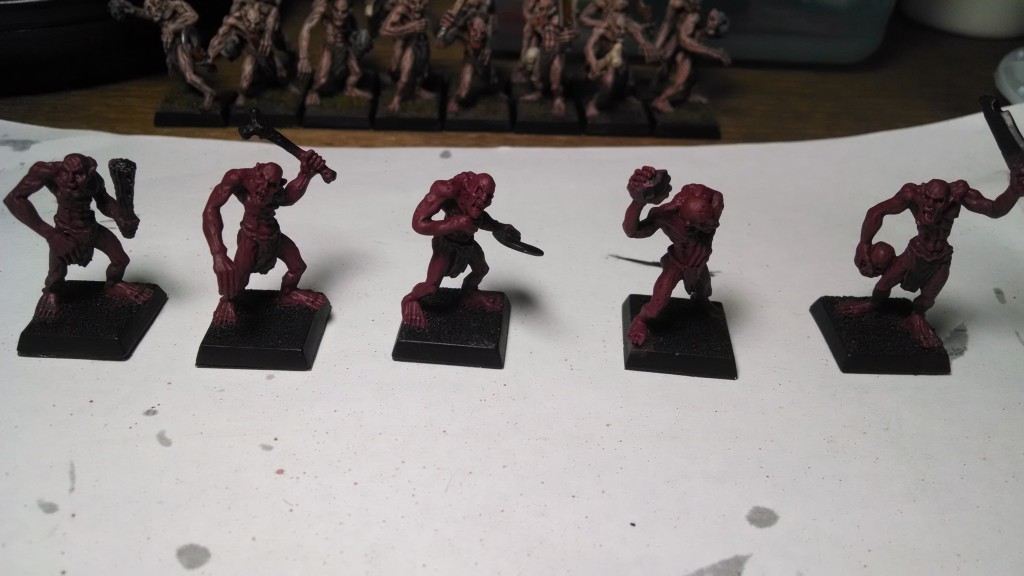 After that is the first layer of dry brush of Tallarn Flesh.  Dry-brushing is easy enough for anyone to do and if you take some care the results are pretty good.  Its use depends on the model and what you’re going for but it works very well on these old ghoul models.  When I did the first set of ghouls, after this step I thought they looked pretty awful but carried on.  It is really the next highlight step that makes the model look like something. 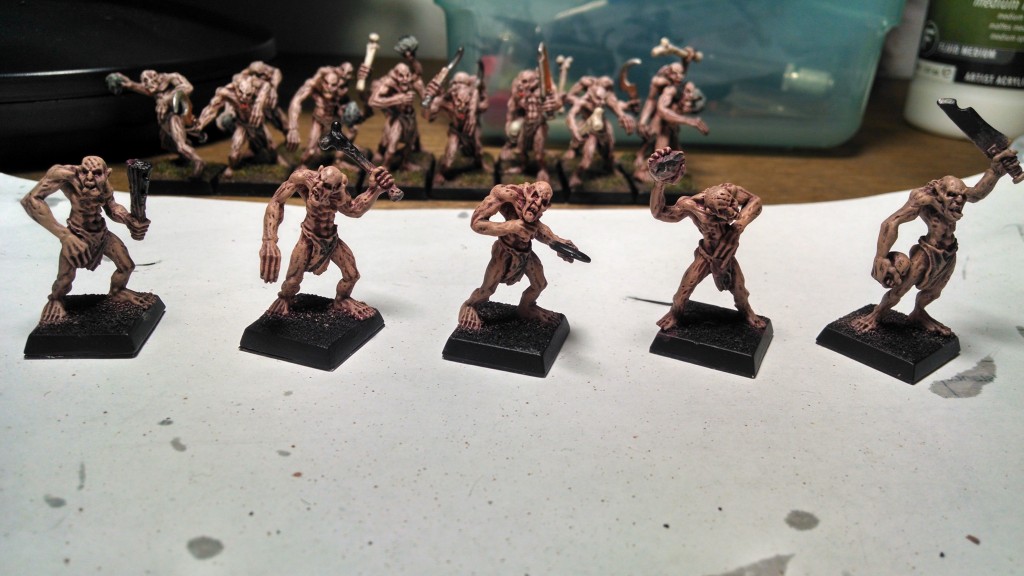 I then finished off the skin with a rather light dry brush of pallid flesh.  This isn’t a completely dry brush of the whole model like the previous layer but is done as the highlight.  I attempt to hit the areas that are highest from what would be my opponent’s eye view or simply from the front and above the model.  I also hit some other areas on all sides of the model where it seemed appropriate to make it eye-appealing.  I’m not the best at highlighting and don’t have the best grasp of it but the models look good.  This step is really what makes the skin look good after looking pretty skeptical just prior to this point.  Simple as that probably 80% of the model is done! 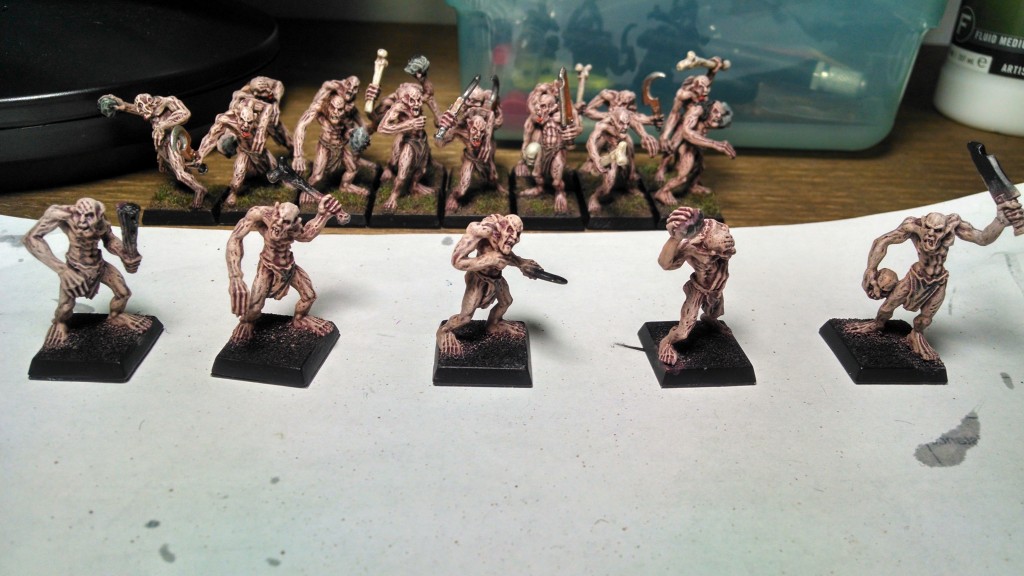 Lastly are all of the detail works which all together probably take longer than the skin that is the majority of the model.  These are done with the same technique of base, wash, dry-brush layer, and dry-brush highlight.  The bone is Zandri Dust – Gryphonne Sepia – Bleached Bone – Skull White.  Cloth is Scorched Brown – Agrax Earthshade – Gorthor Brown – Baneblade Brown.  Metal weapons are Boltgun Metal – Nuln Oil – chainmail.  Rocks are Codex Grey – Nuln Oil – Codex Grey – nimbus grey (a prism color).  The next pictures show these parts at all steps in order. 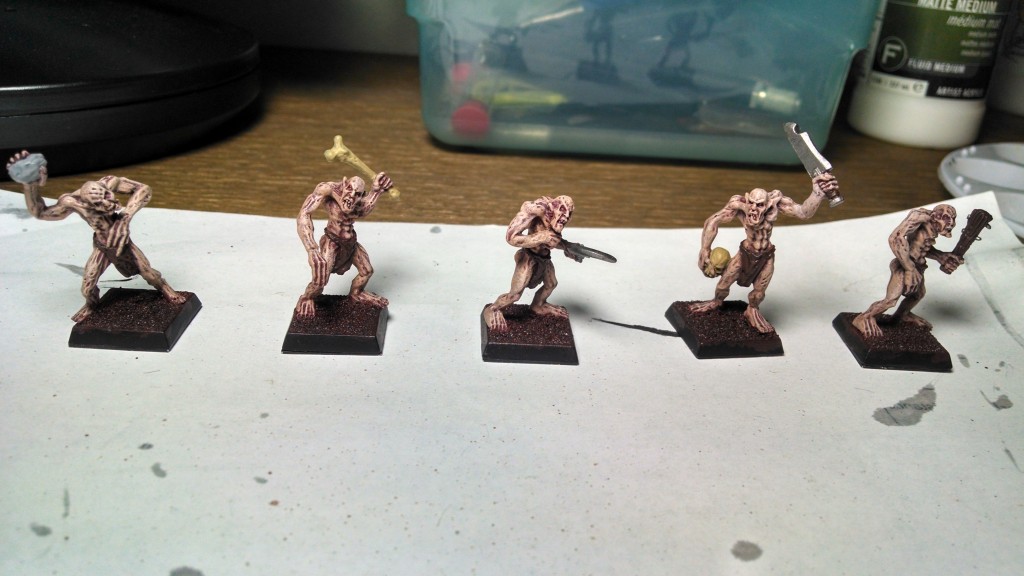 One unique finish is the rust on the metal weapons.  This is done after the weapons are painted as metal normally and using the colors just like in the citadel book, scorched brown – bestial brown – troll slayer orange.  I originally just tried to lightly paint the colors on in layers successively smaller but on my later ones I changed to attempting a stippling technique.  I attempt that by using a rather dry brush and just touching the tip of the brush into the surface straight on, kinda just jabbing with the end of the brush.  It maybe isn’t the best technique but how it ends up gives a little texture and a good random look to the rust.  After I usually touch up some of the edges of the weapon again with a little bit of chainmail which gives a little better look. 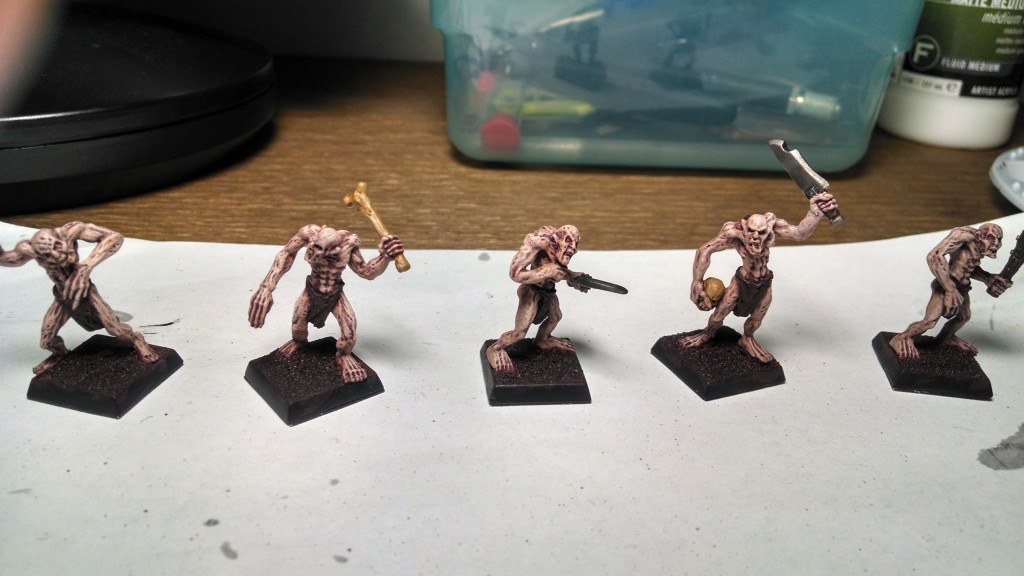 The other unusual thing I used was bloodletter glaze to do the tongues.  I just tried that for fun but it does make it one quick easy step so is probably faster than painting.  The glaze is clear enough to show the shadow already picked out doing the skin but give it the proper red color.  The small details are also picked out and painted.  I paint the nails straight chaos black, the teeth and eyes with bleached bone, and then a small dot of chaos black for the pupil. 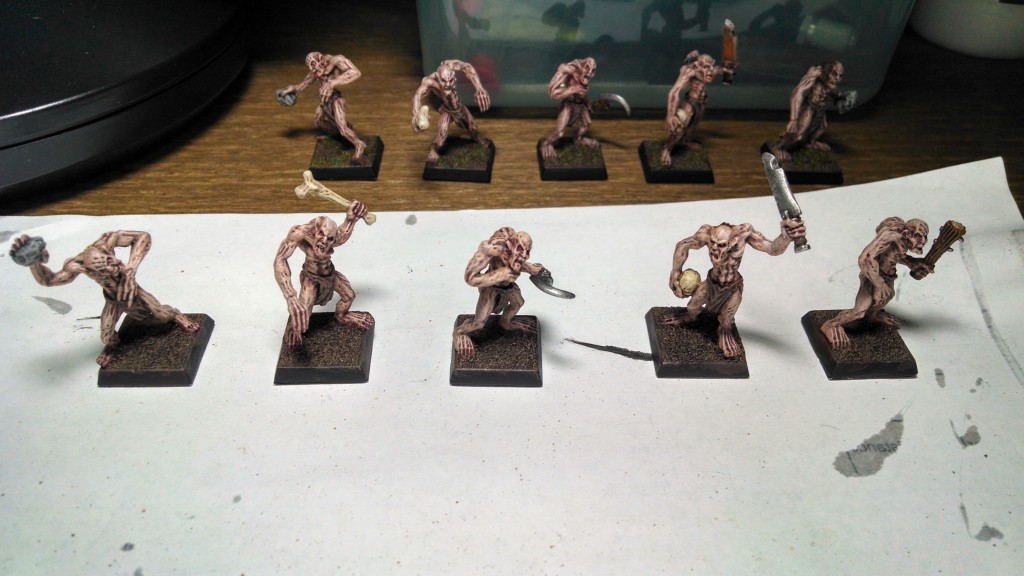 The bases I sanded before priming the models.  I use a ballast I think it is fine and not actual sand.  I just used that because I had it from my Khemri models I started with painting because I liked the more consistent size that it offered.  To paint the base it is base coated scorched brown then washed with Agrax Earthshade and finished with a dry brush of graveyard earth.  I was going for just a generic exposed muddy soil look.  The edge is touched up to finish it chaos black and then I glue some static grass on in random patches.  It is a pretty generic look but I did put some thought into what I wanted.  The grass I use is a mix of green, light, and dark browns together as I wanted it to look rough a sickly as the dead land of Sylvania would and also trampled and muddied from the march of the undead host. 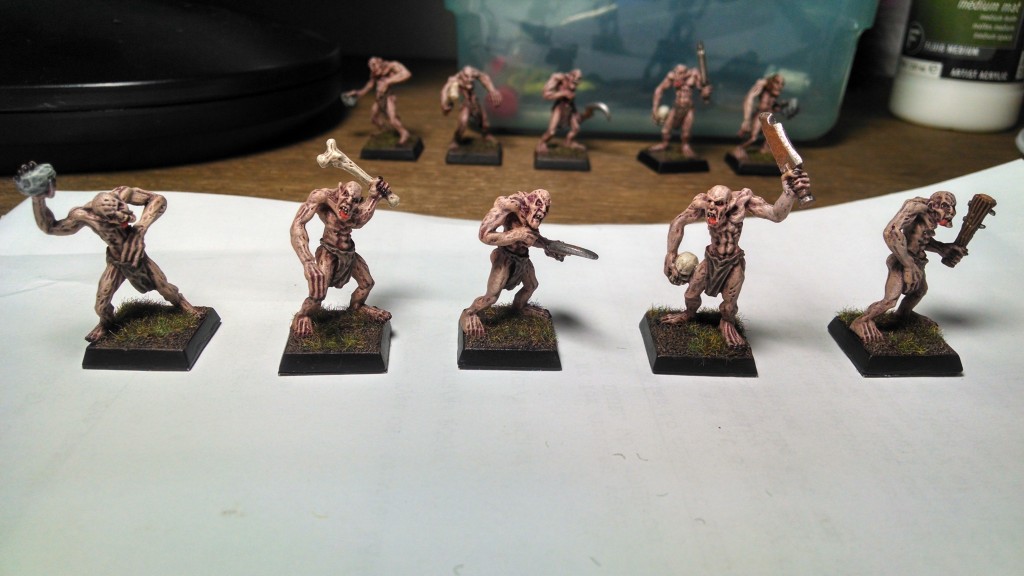 They look very neutral and earthy in general but have a slightly unique pink color from the base coat.  I don’t really have a prominent army theme color or anything and am going for a dark natural look.  I’m thinking of a look something along the lines of when they were The Undead or right after the split.

While they aren’t amazing for painting techniques the pictures might not even be well enough to do them justice.  My favorite pic is the one that shows the unit of the models I have completed so far for the unit.  It really inspires me to see that fully painted unit on the tabletop and can’t wait to have the next out there let alone a full army.  I hope this motivates or improves some of you newbies out there!

Please feel free to email me at [email protected] if you have comments or feedback.