When GW released “How to Paint Citadel Miniatures” I used it to paint what is more or less my first mini and it was a feature on the show about painting.  Unfortunately it is not a great pic which I will have to see about changing but it gives you the general idea.  Like we said on the show the book really gave me confidence to paint my first mini.  The final product, although not spectacular painting award stuff, I think is very respectable and most importantly I am so happy to be able to put it on the table.  The big hump for me to overcome was knowing that I could paint something I would be satisfied putting on the table. 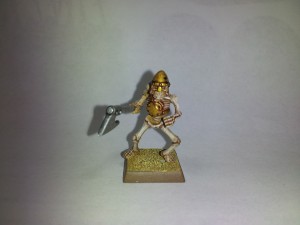 This model was my first and the test for the color scheme of gold armor and silver weapons.  I really dig it and think it worked out well and seems really cool for Tomb Kings.  It has been commented that the weapon looks very odd/plain being completely bright silver.  I don’t want to stray for my complete single color theme and think the big axe is a bad example because of its large area so it shouldn’t be an issue on the actual Tomb King models.

Another tidbit is I actually chose a flesh color (Eldar Flesh) for the main color/dry brush layer but it seems rather unnoticeable being so similar to an ordinary old bone color.  I hoped using a flesh tone would create a ghostly semblance to the bone of a live person.  Maybe I should try painting a skeleton with complete flesh shades just to see how it looks.  I don’t think it would work but would be cool to try.