In Dungeons and Dragons, Icewind Dale: Rime of the Frostmaiden 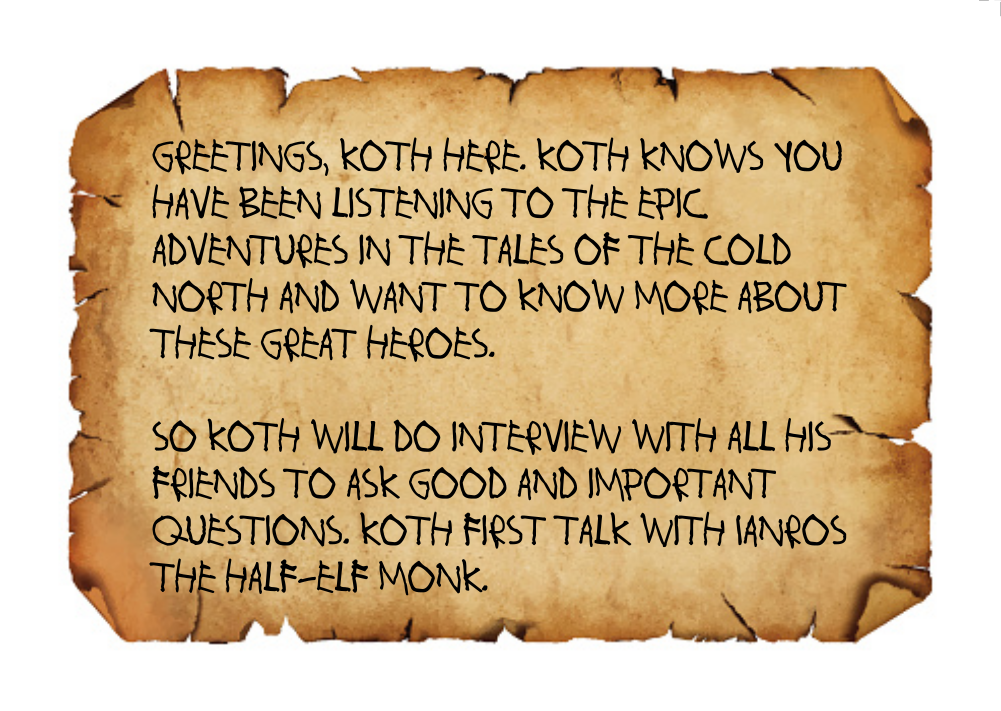 Koth: “Koth is strong, but there are many ways to be strong. What kind of strong is Ianros?”

Ianros: “Yes Koth.  I am strong, but my strength comes from my training of my body and mind.  Through agility and wisdom I have learned to avoid damage and damage my foes.  One must learn to bend like a reed in the wind.  Then one can achieve enlightenment.  Ah… based on the look on your face let me make this simpler.  I trained many years as a monk Koth.”

Koth: “Koth has seen Ianros punch and kick very fast, how did Ianros learn to fight so good?”

Ianros: “I had a master who set me on a new path.  He through great patience and a good deal of pain on my part taught me the ways of the monk.  It involves a lot of meditation and practice to learn how to hit a creature in a way to cause the most damage without requiring a weapon.”

Koth: “Where does Ianros come from? Does Ianros have a tribe?”

Ianros: “I come from the north.  I grew up near Caer Konig, but eventually moved closer to Caer-Dineval.  I don’t have a tribe as you put it Koth.  Just the monks of my order are like my tribe these days.”

Koth: “Koth wants to know, how does Ianros make magic from keys?”

Ianros: “Magic from keys?  What have you been into Koth?  Have you been drinking? Magic from keys?? Oh wait… I think I understand.  Ki is an energy inside of all of us.  It takes a lot of mental discipline to learn to store it, focus it and then direct it.  It is through my training and meditation that I learn to harness Ki.  Using Ki I can perform feats of heroics that most ordinary people can only do under extreme duress.”

Koth: “Why Ianros not wear strong armor? Is too heavy for Ianros?”

Ianros: “In my order we avoid heavy armor.  Frankly it slows us down.  It would get in the way of ability to dodge attacks or do the damage I can.  My lack of armor is how I am so much faster than you in combat Koth.”

Koth: “If Ianros could have anything he want in the world what would it be?”

Ianros:  (Ianros is lost in thought a moment…  He has a distant look in his eyes… for a second you’d swear he has a glint of wetness in the corner of his eye..)  “I want for nothing Koth.”  (looking away)  “I guess… to determine why this infernal winter won’t end.”

Koth: “Koth thinks Ianros has strong mind and strong body, but is there anything that makes Ianros afraid?”

Ianros: “Watermelon…. they  are so red… and squishy.. the texture…” (Ianros maintains a dead serious look for a moment and then a smile appears across his face.  Spreading to the corners of his eyes.)  “There are many things to fear in this world Koth.  I like to focus on the things in front of me and not worry about things I fear.  It is more important how we react when we’re afraid.”

Koth: “Does Ianros think the sun is gone forever?”

Ianros: “ I certainly hope not.  We just need to keep on digging Koth.  I have faith that we’ll find an answer to this infernal winter.”

Koth: “Koth was wondering, does Ianros have enemies?”

Ianros: (Ianros gets a pensive look in his face.)  “I am sure there are those who would wish me harm, but Koth I am not aware of their names.  I would imagine those who wish to keep this winter ongoing could be counted amongst our enemies.”

Koth: “Why is Ianros an adventurer?”

Ianros: “ I seek to help those who can’t protect themselves Koth.  The kind people of this difficult land did not ask for this.  It is their home.  They could move somewhere else, but it would be as if asking for someone to give up their child…. or to lose their hand when they are a blacksmith.  This land is as much a part of them.  They need someone to help bring an end to this.“

Koth: “What does Ianros want to be remembered for?”

Ianros: “I do not seek fame or fortune Koth.  I hope that I am remembered as a kind soul who helped those in need.  I hope someone thinks fondly of me when I’m gone….” (Ianros looks lost in thought.)

Koth: “What does Ianros think is good?”

Ianros: “Good… Koth helping others is good.  By helping others we improve the world around us.  Laws can be good, but they can also be a hindrance to good.”