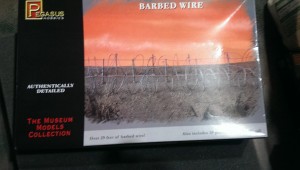 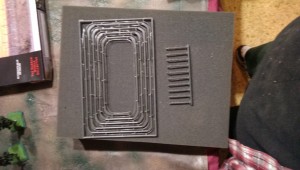 So, in the kit comes two sprues, a wire sprue and a post sprue. There is supposed to be 29 feet of barbed wire in the kit with 30 posts that are 1 5/8th inch tall. On the sprue, the barbed wire is pretty standard plastic, if you have worked with models before and coils around the sprue quite a bit. The posts though are really tall, over the height of a 28mm model. They are intended to support a 3 strings of wire, though at that hieght, while it looks good on the piece, it’s just too tall for the figure. 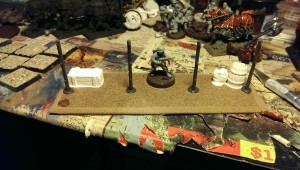 Of course, I am mounting them to a 1/8th inch hardboard material, to give the fence pieces a nice sturdy structure. Dressing up the sections with a few Hirst Arts cast dungeon dressing bits helps give the fence some character too. let’s it look like it’s part of a used field. Cutting it down to just two rungs seems to really be the perfect height for standard fencing, at least any that I have ever been around. 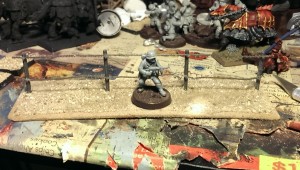 Overall, I am really happy with the kit. However, as a value for the six-ish dollars that I spent on the kit I would say it is good. There are a couple of negatives. There is a ton of sprue in the box for the amount of useable plastic. Besides the posts being super tall, the barbed wire is very fragile. You need to fiddle with it to get it to straighten out. In comparison to other products for barbed wire, like Gale Force Nine’s barbed wire, it’s fragile. However, it looks a lot better then the Gale Force Nine product. More futzing though, which is a drawback as I mentioned and durability is a question. I have yet to play any games with it, but it’s a C+ product in my book. Better than average and good enough if you have some time and have a need for a barbed wire product.