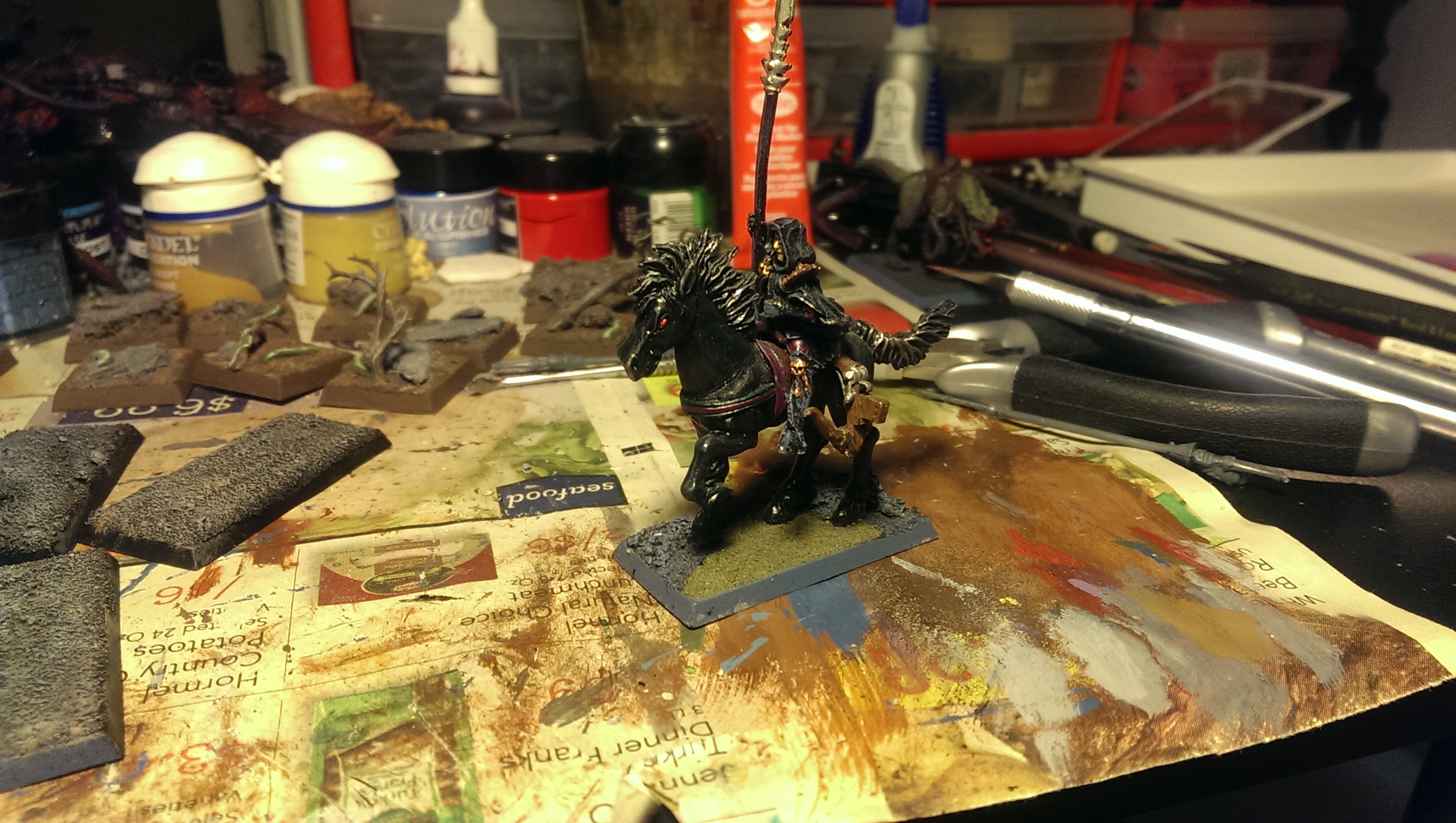 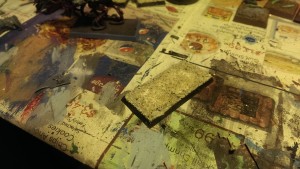 So, it starts with the design of the bases. I seem to have more basing articles these days then anything else, but as you can see with the old model from above, it’s a rocky base with a little dead foliage flock on the base. Back 15 years ago that was innovative when most people were still painting their bases with goblin green and maybe putting a couple of types of flock on the bases. My biggest complaints about these bases is that they look a bit flat, which is ok on the infantry bases but on a larger base like these cavalry bases it jumps out like a sore thumb. To change this, I took some air drying clay and made some hill like bumps onto the base. Nothing fancy here as I am going to cover it up with sand. You could use green stuff or other putty here. I use the air dry clay because it should be durable enough for this application and it’s fairly inexpensive.

Next I covered the clay with sand and took it to the priming board. I hit it with black primer, drybrushed with a brown, then drybrushed with a dark gray followed by a lighter gray. Next, I added flock to the base once the paint is dry. I use entirely Woodland Scenics flocks. In particular, there are two types of flock that I use. When doing a green, grassy look I use their blended turf green blend which is awesome in my opinion. For this application, I used the Earth color which I have used on a lot of different applications including in spots on my Tomb King bases. Now the models are ready for the bases. Once the models are on the bases, I will go back and add tufts and other interesting bits.

For the models, I wanted to focus more on free hand and so on the shields of the knights I scraped any icons that were on the shields off. This gives me a nice, large space to work on free hand or use a transfer. I want to maintain that color scheme with my original dark elf army so that I can use the two together. My main goal with the paint on these figures is to just do it better and with better technique then I have done on the other models. I also always paint knights seperately from cold ones.

With the cold ones, I airbrushed these models with purple skin and for the spiny scales on the backs I turned down the air pressure and took my time and painted the red scales with the air brush as well. After they were base painted with the air brush, I pinned and glued them to the base. The plastic cold ones, while cool, have these little plastic pieces around the feet that attach to the base. These are fine if you are going to cover that up with basing material, but in this case I wanted to add the model to the base so I carefully trimmed and removed this. With the cold ones attached to the bases, I completed highlights on the scales and skin. I also did all of the bits, scales, claws, teeth and leather bits. 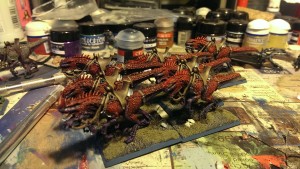 Now I can focus on completing the riders in the same red and purple scheme as my other troops. It’s the same techniques, just stepping them up a level to try to improve the overall look of the army. Each step, focusing on where I can include free hand and little modifications to make this unit just that much better then my old army, while still being able to put it on the table with the older models and being able to still play with painted models as I slowly rebuild my dark elf army from the ground up.