Hey all, if you are interested in seeing one of my games played out from Adepticon 2016 US Bolt Action Nationals, check out this video by Sean (Wahoo Warrior). It’s one of the better battle reports I have watched regarding Bolt Action games and goes through the gameplay, the entire game, and his thoughts as the game played out. If you like the video, make sure you subscribe to his channel! 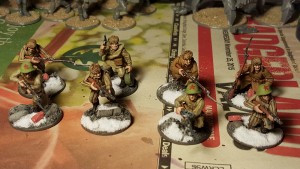 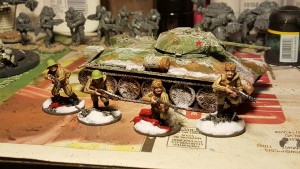 Just a little work lately that I have been doing. Yes, that’s right. We recorded a podcast and now I am motivated to paint models again! Thanks everyone for listening and gotta say I am excited to keep working on models as I get my Soviets for Bolt Action ready to go for Adepticon.

END_OF_DOCUMENT_TOKEN_TO_BE_REPLACED

Brian’s forces set up with, starting with my far flank a Medium Mortar supported by an eight man squad of rifleman. In the center, an eight man squad of Rangers who used their special move to advance into the board. In the ruins to the right was another eight man squad of rifleman. To the far right, the Americans deployed a 57mm medium anti tank gun. Finally, in the tall, centerish building/ruins Brian hid his sniper with a great vantage over my deployment. I was able to do preparatory bombardment as the defenders, scored a couple of pins on the mortar and 1 kill on the squad in the ruins. All in all, not great, but it was better than nothing and I was right away fighting up hill in this game with a lot of board to cross in 6 turns with my mostly infantry army.