Week one of our End Times campaign is set and done, and wow, what a great night! So, let’s set this up a little. It’s Wisconsin. The state’s big school, University of Wisconsin – Madison’s college basketball team is playing for national championships. Most of the state is at a bar or in front of their TV and here we were, 10 dedicated Warhammer players gather at our favorite local game store in town, . People were excited too, a lot of folks there before the normal start time and everyone there plenty early, by quarter after 6.

So, teams were made of 5 players each and after some waiting for order to select their supreme commander we went into the choosing opponents. Wanting to lock in a sure win (well maybe not so sure, but…) I choose to have our skaven player (Trevor) match up against Dwarfs (Gordon). Order picked next, and matched up Lizardmen (Kenny) vs our Ogre recruits (Eric). The remaining match ups were selected below:

We handed out bonus points to the games and away we went.

In my match up against Brian’s (Stark) Undead Legion order had allocated 400 points towards to help boost his chances of beating me. Team Chaos had been a little more liberal with points distribution, partially because the max points we could give our Chaos players was 250 points. This meant I was going into this game down 200 points. All in all, not terrible, but starting out uphill. Brian’s lists tend to be foot sloggers, and there was plenty of that. I think that’s why Brian and I like playing against each other as much as we do because we both tend to run armies that look like armies. My army was a bit all over the place, being in major build and paint mode. As such, I had to field actual Marauder’s in the list, which really were not helpful. 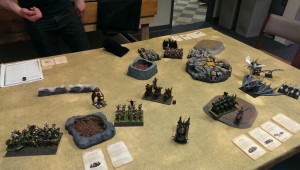 The game ended up being Dawn Attack and this ended up having my big infantry block of chaos warriors of nurgle deployed to my far left flank, near opposite corner of Brian’s army. That meant all of my little units were going to have to do the work in this game, and they were all choice targets for Terrorghiest screams. Retreating a bit from my right flank as Brian powered to take position on that side of the board, we played a couple of turns of cat and mouse trying to see where my Daemon Prince would end up vs. that screaming monstrosity. Around turn 3, he popped my nurgle chaos knights and being down enough points to lose and feeling like he’s going to pick me off a scream at a time, the skullcrusher knights and the daemonprince engaged the infantry center.

Now here’s where a big dice fail hurt my gamble. With my Nurgle infantry out of position, I didn’t have enough punch left to threaten his vamp lord or the Terrorghiest in the center and when I failed a charge into the flank with the DP that the Skullcrushers made the charge on, I didn’t think I had enough killing power to knock off the big block of skeletons in one round. This was soo true and bought Brian a turn to move in. After some more combat in the center, I had stuck in my DP to support. Brian brought in the Terrorghiest, screamed off the DP and his great sword Grave Guard slowly hacked down the Skullcrushers.

My big come back move was then to charge the Terrorghiest with everything I had. I failed all of the charges but one, and my chaos sorcerer lord connected with the rear of the Terrorghiest. After a couple of rounds of combat, the beast was slain. It was a big price to pay though and one that was a bit too late to save me the game. In the end, the difference was 133 points in Brian’s favor. Chaos went down.

The night saw the forces of Order pull it out in victory, 3 wins to chaos’s 2 and they have retaken southern Kislev. I hear tell there are great gatherings of Nurgle in the north and that the mumblings on the mouths of his worshipers are of tales of the Glottkin.

Here’s to another big night next week.