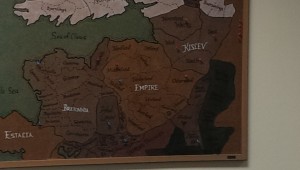 We did end up with one game where we had an odd player out, so we decided to make that a three way Triumph and Treachery game. This worked out well, and we decided to make it so that if the High Elves or Skaven won, that the victory counted for their respective faction. If the Ogres won, then it counted as a loss for both factions. This seemed to work pretty well in the grand scheme of things. In the end, this big game ended up as a win by one coin (50 points) to the High Elves.

As usual, chaos had to recruit a couple of ogre players to balance the sides, but this worked out well as we paid off our ogre hirelings well and put them to work. Both managed to score wins for Team Chaos against their opponents in very close, very contested games.

In the rematch of the week, the High Elves came to play, but they didn’t learn their lesson from the previous week and the Warriors of Chaos led by a Nurgle daemon prince sent the elves packing. Perhaps the elves were more concerned about events on Ulthuan this week as the wars there are seeming to heat up.

I was matched up against Gordon’s dwarfs and looking at the match up, I felt good about it as Gordon tends to not use cannons and organ guns. Then Gordon sat down and set up his army and bam! both an organ gun and a cannon in the list. The rest of the army was a big block of Gordon’s legendary ironbreakers, a block of hand weapon/shield longbeards, and a block of warriors with Great weapons. Scenario was Meeting Engagement. The table was set up as if, I felt, we were fighting on a road in the northern Empire that led to Kislev. Perhaps a trade road or something in which our two forces met on the march. 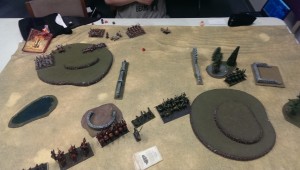 Initially the dwarfs locked on with a cannonball shot for my level 4 death wizard, but managed to roll a 1 to wound. The following turn I was able use my sorcerer lord to snipe the dwarf BSB as he was scooting to join Longbeard unit. With chaos knights of Khorne, a Khorne Chaos Lord and a unit of skull crushers bearing down, the ironbreakers charged and were crazy resilient! Still, stout armor and runic axes were no match and after a few rounds of combat were cut down. As the fierce warriors of nurgle surged forward, cutting down a gyrocopter, they continued to crash forward into the longbeards stationed on the road to Kislev. With the blessings of the dark god and the work of heavy halberds, they cut the old dwarfs down to a man. Meanwhile the cannon and organ gun blared again and again, taking the sorcerer lord down in a paste of red explosion.

Having had enough, the skull crushers road fiercely on, crushing both thunderers and quieting them and then the cannon. Sweeping around the dire swamp on the left that had been started to take on the darker powers of the land’s new owners a chariot ridden by two fierce northman crashed into the organ gun. The crew hacked down from the crash of the chariot’s impact slammed into the machined itself. With a boom, both chariot and machine detonated into a fireball of gunpowder and smoke. The last of the ironbreakers did rally and make one last stand, but calling on the blood god, the great chaos lord of Khorne finished what was started.

At the end of the bloody day, many skulls and much blood was shed. Victory was had for the forces of Chaos. The army known as Pestilent Wrath had it’s day and rode south howling of mad men. Howling as men of Khorne!

With 4 wins for Chaos and 1 win for order combined with a Glottkin invasion, 4 territories fell as the forces were hard pressed to hold back the impending invasion. Is it too late for the old world? Well, we’ll see next week.