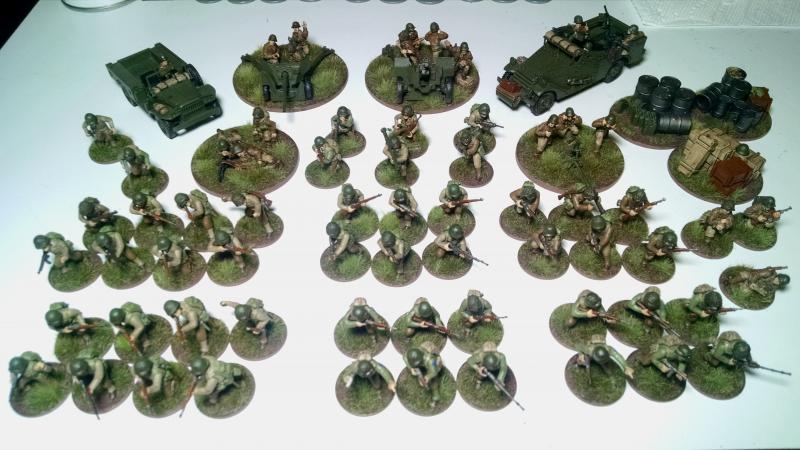 I approached building this army with very basic goals in mind.  I wanted them to look good on the table top and didn’t go for anything over the top.  With that in mind I painted all these guys and vehicles with a simple base coat and wash.  While this technique doesn’t hold up under close scrutiny; they look pretty good on the table as a fully painted force.  I kept a fairly limited pallet but used a fair amount of colors for different details.  For the basic uniform colors I used a Flames of War guide for vallejo paints that I then cross referenced to Games Workshop colors.  For other details I used GW paints of the appropriate colors I had already and then a brown wash over the whole model.  I plan to rundown some further detail on the painting and basing in another blog post later on. 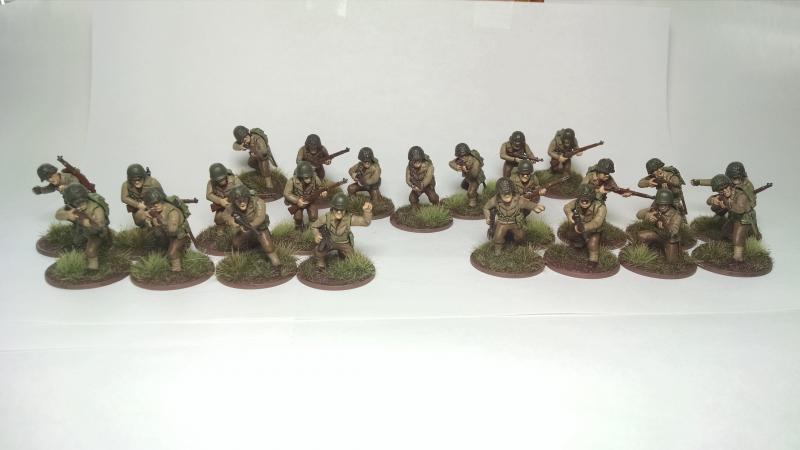 First up is my regular (front) and veteran (rear) infantry.  There is no difference in how I painted them but that is just usually what I use them as on the table.  If your building, I find the 8 man squads to be a good number for regs and you can go a little less if they are veteran.  I out fitted my regulars using the information on the box and following the rules.  My NCOs have an SMG, there is one BAR per squad, the rest carry M1 garand rifles and are outfitted with packs for late war.  I even made a couple with the grenade throwing arm for some variety.  My vets are armed with a couple more SMGs because I typically use them as a truck in and close range unit supporting my flamethrower.  I went pretty heavy on the gear giving everyone packs, entrenching tools and a full belts of pouches.  I was thinking that my army would be representative of a force on the move and pushing the front forward. 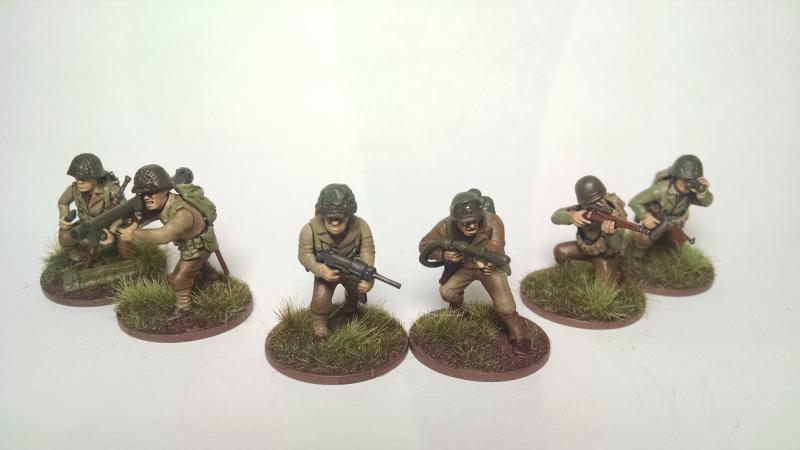 Following from the infantry box are a few small weapon teams.  For the new players these a just built from the infantry box.  Although, the flamethrower bit only comes with the Rangers box.  It is really cool to be able to build these specialized units straight from a main box.  The sniper is usually always a good inclusion in any force (although lately mine rarely can hit the broad side of a barn).  The bazooka is a little more specialized.  I like to include it because in my forces I am usually limited with anti-armor capability.  When it hits it can crack some of the toughest armor.  Popularly you can use it to zoom and boom (drive up, bail out and point blank shot) but I usually use mine in reserve.  From reserve you can wait until the armor makes an appearance and then come on in the best spot to take it out.  Lastly is the flamethrower which have lost a little potency in version 2 but they are still a very strong asset.  There are plenty of bits with the infantry sprues that let you give some real character and distinction to these teams. 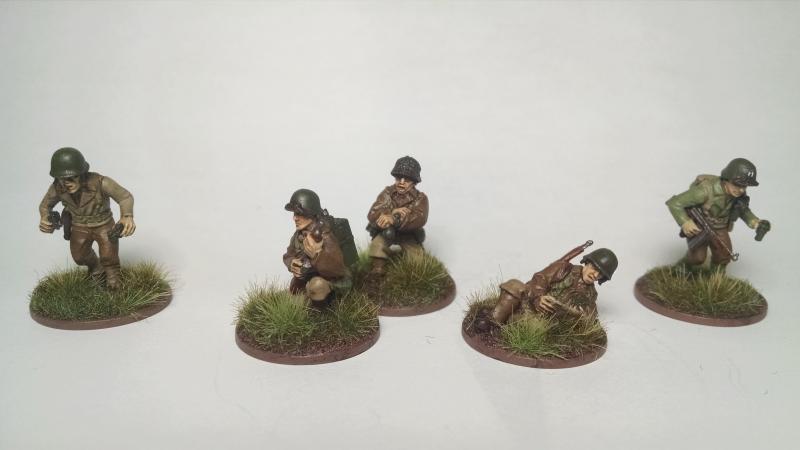 Somewhat from the infantry box again are some command units.  My original lieutenant, on the left, was made just from the infantry box set.  I gave him a pistol, binoculars, no pack and a cigar in his mouth to distinguish him.  I quickly found out that a pistol is pretty limiting on the table especially if I am not solely using him as a moral bonus.  Later when I had the rangers set I made the other lieutenant on the right.  He is better outfitted for the front line with an SMG, pack, binoculars again as well as, from the ranger box, a light and the officer ranking marked helmet.  Again making all these special units from a main box is awesome.  Differently the three center guys are the metal forward observer pack.  I liked the character of these guys and to get that much from the infantry boxes would of been a lot of work.  Since there are three and I usually run the FAO as only two men, the third makes a really good spotter for a mortar or howitzer.

After all the talk of the rangers box, here they are (front) along with some engineers (rear).  The ranger box is just the infantry box with some extra metal bits included.  These guys are built carrying M1 carbines besides the one BAR, NCO and an additional man also with SMG per squad.  The kit comes with multiple metal heads for some added character.  Most notably the heads with the goggles.  There are also many other equipment pieces such as wire cutters, hatchets and picks among other things.  Another notable bit is that bangalore torpedoes.  I use that to help pick out the squad as engineers but it usual gets a question of rules but there aren’t any besides maybe in a scenario somewhere.  You may notice that I swapped some of the colors around to differentiate some of the units a bit easier.  I also added a blue diamond on all the left upper arms for something a little more noticeable showing they are rangers. 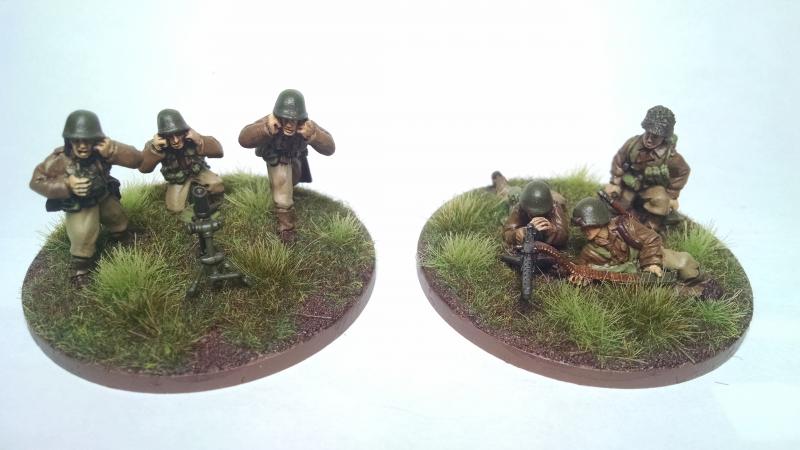 Next up are a couple of the other weapon teams.  Medium mortar and medium machine gun.  A mortar is pretty useful in most forces and I also find the machine gun okay.  The mortar model is an older set from warlord and I actually used a bazooka to make the tube a little larger.  For the points the machine gun might not be the best but how can you go to battle in WW2 without at least one on the table?

The big guns! A M2A1 medium howitzer and M1 57mm AT gun.  I had the AT gun first to have some punch against armor in my force but found it kinda limiting in version 1.  It was hard to have a good shot against armor with a mostly stationary weapon.  Then I switched to the medium howitzer which is a little more versatile.  The howitzer can still threat armor a little but in addition is very intimidating to infantry giving it more practical use.  Also being able to indirect shot is handy sometimes and gets even more useful with a spotter.  Now in version 2 I have flipped back to the AT gun over the howitzer.  The boost to it’s HE makes it more useful against infantry targets while being a big threat to armor. 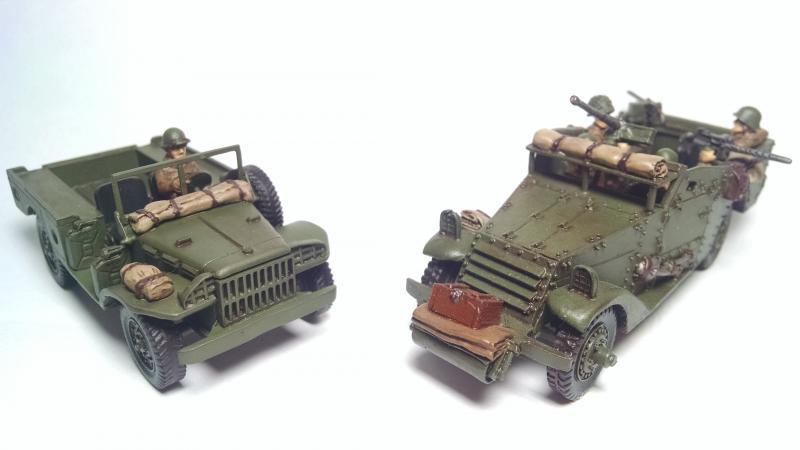 These are the first 2 vehicles that I added to my force.  They are the 3/4 ton Dodge truck and M3 White Scout Car.  I originally got the M3 for an armored transport but quickly switched to just using it to represent a truck.  It wasn’t worth paying the points for armor or the guns how I was using it.  Now in version 2 things might have changed being able to fire a gun from an empty transport but I am yet to run it myself.  So I was running the equivalent sized truck, the 3/4 ton Dodge, in my list without a model for a while.  Then, when I was looking to get an actual model, warlord came out with one!  It is a nice truck for the Americans.  It comes with a canopy and the windshield could be folded down.  I opted for no canopy just because I liked the look better.  I did add some stowage with the jerry cans and tarps trying to give it some character.  It is okay but I think it would be really good with some rails on the sides of the bed.  I just haven’t gotten to modeling some up yet.  The scout car is full of character and a really interesting model.  I had previously been using it to practice and see the effectiveness of a recce vehicle when I was looking to get a M18 Hellcat. 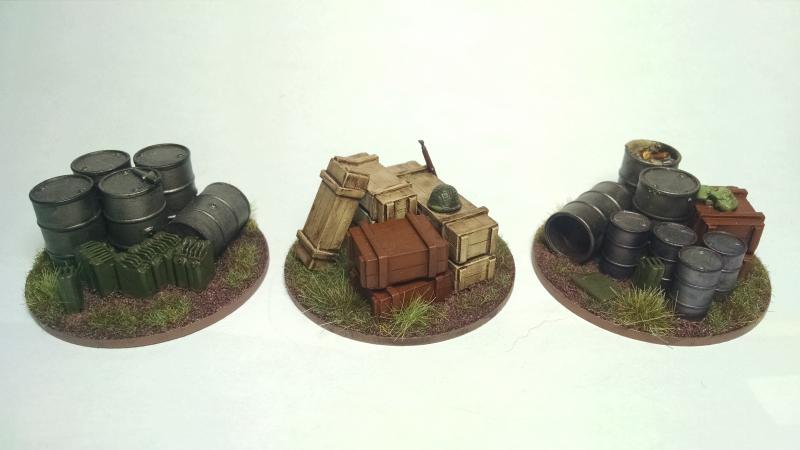 Rounding out my initially finished part of my collection are these objective markers.  I can’t remember what brand the supplies are right now.  I was thinking of doing a blog on easy objective markers and then I will look back and see if I can figure out what they were.  The cans, barrels, and crates all came as individual parts.  I combined some to make something like a little fuel supply, ammo/weapon supply and then just kinda a random supply pile.  These work good for objectives in game and are just neat little pieces on the table.

That sums up the initial force I amassed.  I did not buy all this stuff as one big purchase with an overall plan.  I went about getting them in nearly the order you see here.  As Ben and I got started we played lower point games and increased as we got things bought and built.  Eventually rounding out a standard size force and then swapping in different options as we pleased.  Check back for the second wave of expansion soon.

US Army Showcase: Wave 2 and Adepticon