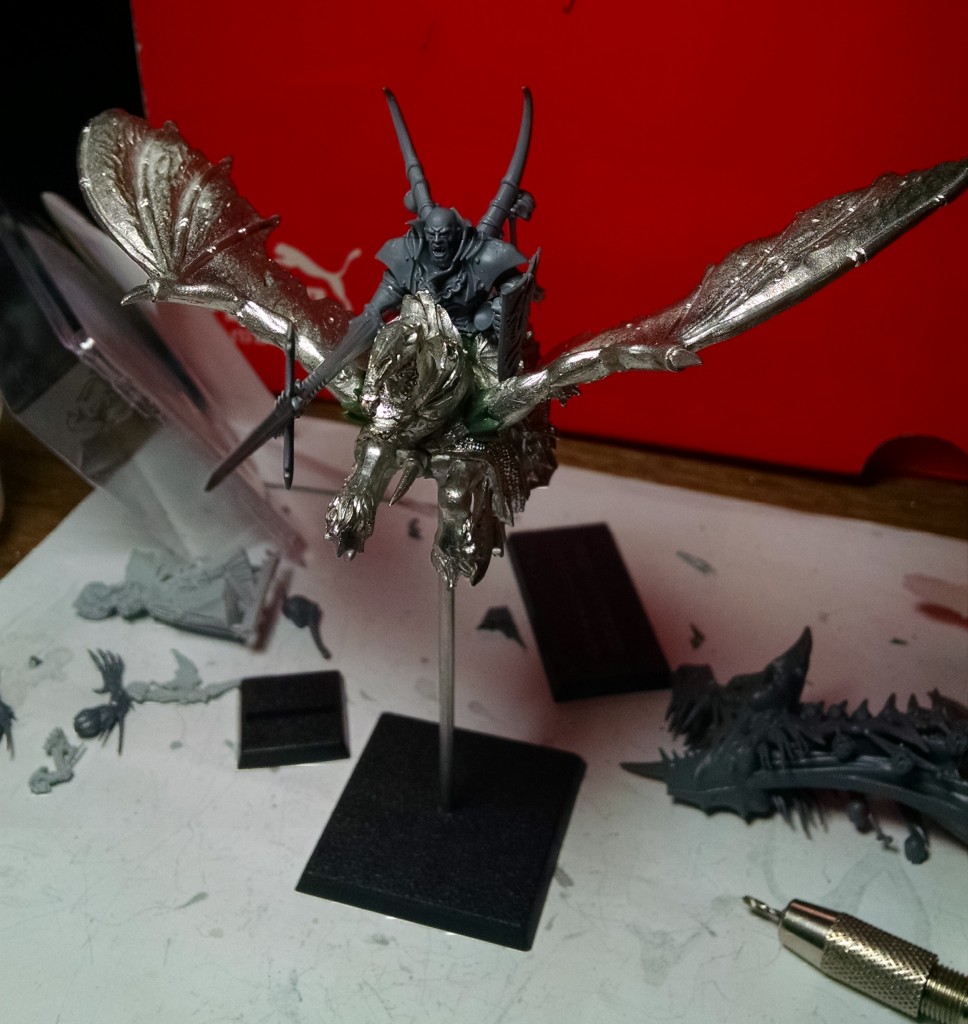 I think this guy was mentioned in Episode 53 which we recorded right after I finished him.  This guy as the title says is a vampire on hellsteed that I converted up out of a few different kits as there isn’t any model for one at the moment.  Although I was hoping I’d have it done in a week when I started I still actually got this done pretty quick in only about 2 weeks.  I took a fair amount of work in progress pics and put them together with my thought process in this post for you all to check out.

Here are all the parts laid out to make up this model.  There are three kits that I used to get them all from.  Most of you familiar with the vampire count model line can probably recognize them.  For those that don’t the main body of the horse is from the mounted Count Manfred von Carstein.  The other really recognizable piece or pieces is the vampire body from the new zombie dragon kit.  Maybe less well known as they are a little old and out of print are the wings, they are from the blood dragon on winged nightmare kit. 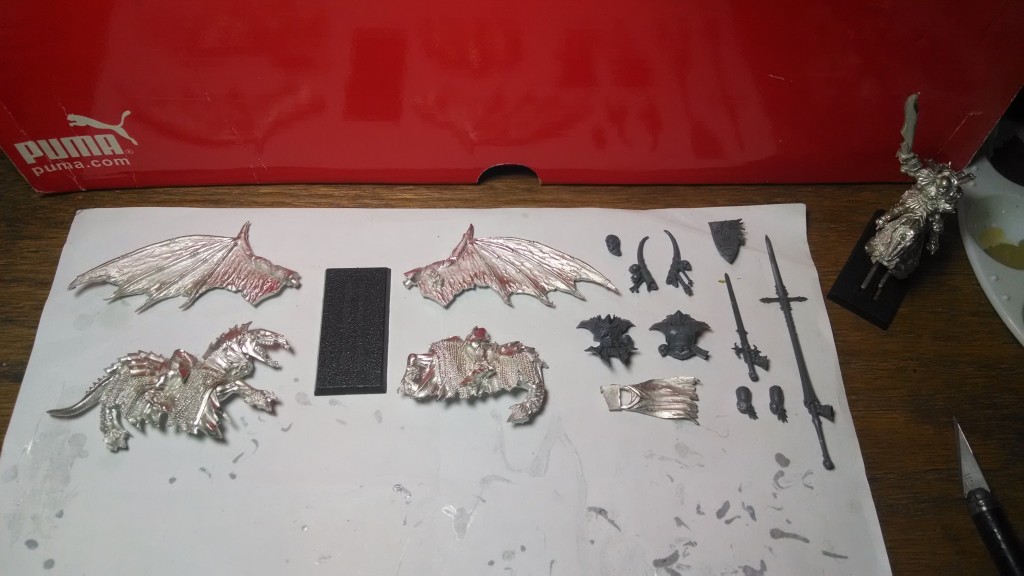 I picked up the Manfred model quite a while ago discounted at one of the local game stores, The Last Square.  I never had intentions of fielding the model as is because I don’t really like that Manfred.  The nightmare is pretty cool though, it has a lot of character and presence with it’s full barding, skull head and odd for a horse but very bestial tail.  I know when I picked it up I’d use it for a conversion but don’t remember if I thought hellsteed right away though.  At some point though I decided this would be the perfect start to a hellsteed.

Here you can see all the gaps when putting this beast together.  Haven’t worked with so much metal in a long time but it was definitely more time consuming than plastic.  This guy would probably be much better to be done from the finecast version for weight but this is what I already had.  Here you can see some of the gaps this guy had, not too bad and easily filled but haven’t dealt with that in a while. 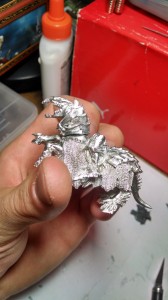 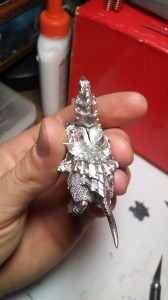 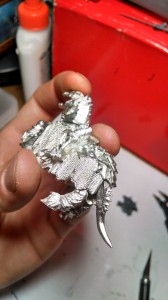 In many conversions on the tubes I saw people using the vampire from the zombie dragon kit for all sorts of stuff.  Some looked better than others of course and I hadn’t seen one fitted to Manfred’s steed before but I knew it would be perfect for my conversion.  In the pic I had laid out all of his parts because at the start I wasn’t sure if he’d have a sword or lance as well as if I’d use those huge horns/spikes on his back.  I did know for sure I’d use the bald head without the helmet because I noticed a striking semblance to one of my favorite models.  It is a just a mounted vampire often referred to as The Red Duke, a really old sculpt but a very cool one.  You can see him pictured with the parts in the upper right for inspiration in his much needed update.  I have fielded him recently usually running with blood knights but his model is really small comparatively.  I was really excited to have this guy reincarnated in my hellsteed model and once painted will surely have red armor.

As I said the wings came from that blood dragon on winged nightmare model.  I compared many wings but these really fit the look for me and I knew right away they were the ones.  Others I tried were vargheist wings, I’ve seen many hellsteeds made with these, but they just weren’t big enough and not worth the effort to enlarge them.  I also looked at others I had around from the Melkoir winged nightmare which weren’t quite the right look or size either.  Even considered LotR fell beast ones I had around or the zombie dragon ones new and old but they were all too big.  You can see I had the cape from the blood dragon winged nightmare model laying there too because I really wanted this guy to have one originally to throw back to the old Red Duke model but this one was just to small.

Anyway that is way more explanation than most of you probably have interest in so lets get to the conversion.  First thing first was getting the body onto the legs that are modeled into the steed.  I really liked that the legs were like this as I have seen too many conversions using the regular rider legs and they are usually too splayed out from fitting the dragon to fit a regular steed.  That could be easily fixed but less easy would be removing the legs from the steed.  I was very happy with the ones molded on the steed as they match being fully armored and pretty much same style.  After a little bit of trimming to remove the front lower armor on the torso I pinned the torso to the legs/steed and just did a rough fill with green stuff.  In these pics you can see I also filled the gaps in the steed at the same time. 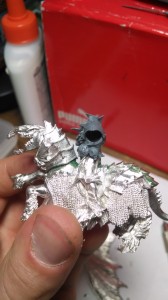 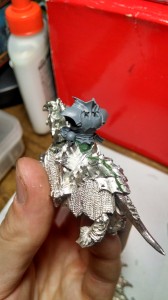 When I started I wasn’t really sure how I’d make them seam together.  The front worked out really well as it was mostly hidden by the head of the steed and is left rather plainly filled in besides sculpting a bit of the bat wing plate covering the leg on the right side.  The back was quite the contrary as it is completely exposed and looked wrong leaving it just plain plate over the bum.  The top armor was also sticking out a little too much to look appropriate so my first thought of sculpting in chainmail was out.  To fix that I ended up sculpting another layer of armor plate matching the layers above on the torso.  In hind sight I realized I maybe should of used the dragon riders legs for comparison and sculpted some plates more like that.  In the end what I did seems to look good enough though and definitely not worth redoing. 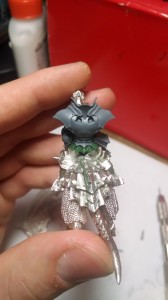 Up next after the torso was adding the wings, to do this I pinned them too the model first.  I chose there position by looking at the Bretonnian pegasus knight models for reference.  When I was eyeballing the fit I noticed they needed to be spaced away from the body more than how they were sculpted so I left the protrusion that mounted them to the regular model in as spacing.  This left a big gap which was easily filled in with some green stuff.  I first filled this with green stuff just to bulk out the wing arms to the right size. 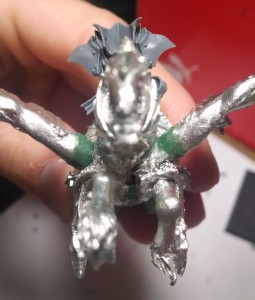 When I started I wasn’t exactly sure how I would match the wings to the steed as where they meet is completely armored with chainmail barding and strap at the top of it.  So the best thing I came up with was to sculpt an armor plate cuff at the joint.  I shaved the strap of the barding so that it would be centered at the joint, just so it match on both sides.  In a similar style to the armor I did on the back of the vampire I made a ring cuff with a sort of wing shaped design at the front.  I don’t know how better to describe it but I think it serves to complete the join to the armored steed.  I did one at a time and the left one may have ended up a bit bulkier but with the hand sculpted stuff I don’t think it is noticeable enough to warrant messing with. That is really the bulk of the conversion and the only thing that was left was to fit the rest of the riders parts together.  This didn’t take much besides glue but some of the parts had to be shaved to angle them properly.  The neck was shaved to fit the head looking straight ahead, different from the downward look it normally has.  I more or less lucked out with the fit of the arms as there was barely enough room for them to fit.  The shield narrowly fits the gap between the riders leg and the wings.  By now I had also chosen that this guy must have a lance to finish off the impressive look of this model.  I originally thought the lance was a little over the top huge but it fits this model really well.  The last bit was figuring out whether to give him a cape but after eyeing the look of the horns/spikes on his back I thought they worked okay.  They seem way too huge as they are probably as long as the vampire is tall but this is fantasy and they again add to the over the top look.  I also put the spike on the front of the steed which I wasn’t sure about originally but it fits once I had the ones on his back. There are still a few touches left to do before it would be ready for paint but I got it to table top ready.  It needs a little more green stuff to fill a gap in the shield arm elbow and to give the straps on the steed armor I mention the right shape.  One concern I am still not decided on at the moment is the finishing the basing.  It is just a cavalry model and not a monster so often hellsteeds are just on the regular cavalry base. I debated having him on the ground or in flight and I chose to do the later.  I opted to put mine on a 40mil because of that as it will give this heavy guy a little more stability.  I originally centered the rod beneath the steed but I may need to move it backwards as it is back heavy currently or at the least weight the base because he isn’t stable on felt.  I could see how this guy can have a lot of potential for a scenic base but I’m feeling in favor of leaving it plain as it is odd to me to have a chunk of terrain flying around the table with him.

All in all I think I ended up with a really cool model and have been enjoying having him on the table top.  I have a few other conversions in the works or finished that will get posts to follow as well so come back for more and keep listening to the show for when I finish some of these guys.  I’m really excited about them and hope you enjoy and get some inspiration from mine.